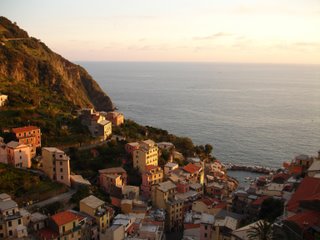 The cusp of October seems to be peak season for hiking the Cinque Terre. At least four groups of Umbra students struck out independently for Liguria’s craggy coast and found themselves meeting up not only with each other but with study abroad students from all over Italy. They encountered one another in such diverse places as: the bay at Monterosso, a cliff-edge in Corniglia, the restaurant La Torre at the brink of Vernazza and at the ever convenient Bar Centrale in Rio Maggiore.

The slight cloud cover and drizzle did nothing to deter Umbra diehards from trekking the entire 18 kilometers of coastline–from the flat but scenic passage from Rio Maggiore to Manarola, to the steeper, rockier climbs between Vernazza and Monterossa. Students were heartened (and goaded on!) by the number of late-middle age trekkers with their walking sticks and even stalwart Desiree-the-dachshund who astonished all with her stamina and eager climbing. The swimming was as good as the hiking despite the jellyfish; the kayaking and ferry journeys to each of the five lands even breathtaking. Students, ravenous from endless activity, took advantage of the many sumptuous lunches and dinners offered by local restaurants.

In photo: Sunset in Cinque Terre