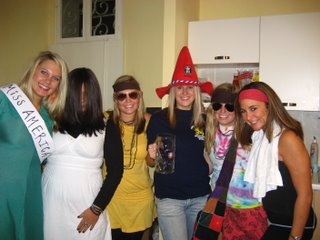 On your list of “Great Things The States Gave To Italy,” right after peanut butter, 24-hour photo stores, and the Gallup poll, you can add “Halloween.” Last night the streets of Perugia were full of ghosts and goblins, prom queens, Barbies (but strangely no Kens), ax murderers and their victims, and even Elvis (circa 1972), but the best thing about the party was that it’s become more than just American study-abroad students getting odd looks from passers-by. Waves of Umbra students have introduced their Italian friends not just to dressing up, but also to bobbing for apples and telling scary stories in a darkened living room lit only with a candle. Halloween, at least in Perugia, is becoming more and more naturalized, and is even less commercial than in the United States…and the Umbra Institute is proud to be part of that, ‘cause heck, bobbing for apples is fun!

Above: Umbra Student (and Miss America 1969) Sarah Pies leads off a group of Umbra Urchins.