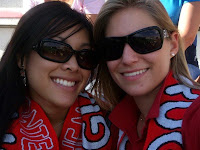 “Go Griffin!” Imagine hearing twenty thousand Perugia soccer fans roar this at once, then break out into one of the songs that honors the city’s soccer team and its mascot, the Griffin (symbol of Perugia since the 1200s). Though Perugia is no longer in the highest league (Seria A,) like the glory days of the ‘90s, the the team still has a huge and devoted following. For the last Perugia home game, Umbra Institute staff member (and program alum) Tyler Pace organized a group of sixty-two students to take part in Griffin-mania. The lively troup went down to the soccer stadium by bus and watched a great game against rival Crotone. The Griffin prevailed and students came away with new Perugian friends, bright red scarves, and a sense of belonging in this soccer-crazy city.

Click here to watch a video of the goal