When most people think of Seattle, images of a growing seaport might come to mind, of streets dotted with Starbucks, of Microsoft and Boeing. It seems strange, therefore, that the largest city in the Pacific Northwest region of the United States would call Perugia, an ancient and relatively small Etruscan city known for chocolate and its historical character, its sister. Certainly, at least on paper they have virtually nothing in common. Yet this is not the point of the “sister-city philosophy”. In fact, it was the very differences of Seattle and Perugia that brought them together in the first place, a refreshing desire for each city’s citizens to learn more about a completely foreign culture.

The story of the sister cities has come a long way from its initial founding in September of 1991, when the mayors of Seattle and Perugia, Norman Rice and Mario Valentini, signed a formal pact of friendship.

Yesterday, some fifteen years later, the president of the Seattle-Perugia Sister City committee, Mike James, presented Laura Noges, a native of Seattle and current Umbra Student, with the inaugural Sister City Scholarship. Those in attendance, including Academic Director of the Umbra Institute, Dr. Carol Clark, and Daniela Borghesi of the Office of International Relations of Perugia, met in the Sala 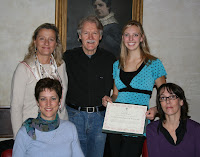 Rossa on Perugia’s Via dei Priori where Laura graciously received her scholarship. Ms. Noges was also gifted a pin reserved for Perugia’s honorary citizens. Shortly after, she happily accepted Mike James’ invitation to become a future member of the Sister Cities association.

The Umbra Institute offers two partial scholarships annually, one each semester, to residents of Seattle or Grand Rapids, Perugia’s other sister city.