In 1717 the leading Perugian noble families decided that Perugia would always be a backwater provincial town if it didn’t have an opera house. They pooled their money and built the Teatro del Pavone, the Peacock Theater, which was the exclusive preserve of the upper class until the building of the 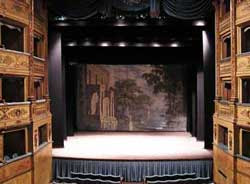 other local theater, Teatro Morlacchi. The Pavone was renovated once in 1848 and again in the 1980s but is more or less as it was in the early eighteenth century: a beautiful opera house with four horseshoe-shaped ordini(levels) of box seats, an orchestra below, and a grand wooden stage. Don’t miss the peacock above the stage, either!

Umbra students usually fall in love with the Pavone one of the first Monday evenings of the semester. The Pavone opens the week with a movie in original language, mostly English, for the movie crowds in Perugia. Students are amazed at the experience of watching a movie in an environment without concession stands, stadium seating, but then again, tickets are only 4 Euro. It is all about having new (and sometimes a little less high-tech) experiences. See you at the movies!