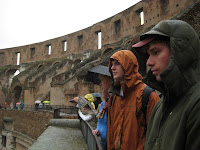 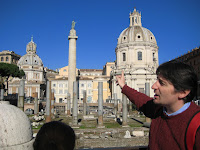 Rome was taken by storm this past weekend by Professor Giampiero Bevagna’s Roman Empire class. The students left Perugia early Friday morning for a tour of Ostia Antica, Rome’s ancient port. Professor Bevagna lead the tour and made sense of the ruins, even jokingly inviting them to eat at the counter of one of Ostia’s now-ruined “cafés.” Later in the day students were free to explore modern Rome in the search for a good restaurant at a fair price near Piazza Navona. The academic fieldtrip continued the next day with tours of the Roman forums, the Colosseum, and the Baths of Caracalla. Spirits remained undampened by the light rain and a good time was had by all. Next week section B of Roman Empire will besiege the city.