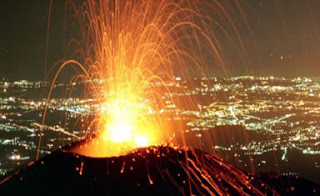 “Traveling alone was the most amazing adventure ever… Not knowing where you’re going to go or what you’re going to do every day is just so exhilarating”. These are the words describing Umbra student Leah Henry-MacDonald’s ten day spring break foray into the heel of Italy’s boot, a journey that took her through the likes of Palermo and Catania, Termino, Siricusa and Agrigento. It was a trip taken by train, bus, and even a Vespa, a trip that gifted Leah with unforgettable memories and a bundle of new friends. Ms. Henry MacDonald had this to say about one of the many moments that made her time in southern Italy so special…
Thump thump. The heart pumps, rapping like and unwanted stranger on the ribcage door. The pounding reverberates down the arms, thumb twitches involuntarily. Time slows and adrenalin roars in the ears, prickling like hot needles just under the skin. Heightened senses build the surge, until every cell boils with anticipation. Thump. Ready? Thumpthump. Go.

We were in deep now, even my solid white exhales were lost to the dark. My adventurous flashlight led the way, revealing waves of rock of the crumbling floor, pockets and holes on the walls, and a dripping ceiling with a great fissure running along it like a spine. With the ever-growing population of bats overhead and my trusted off-duty tour guide, we crawled forward, hunched over so low I could almost taste the wet ground.

Reaching a bend we were finally able to stand. Barely. My flashlight looked around. More bats. It was then it hit me. I’m in a volcano right now. Standing in the heart of one of Mother Nature’s most destructive mood swings. An old cave, created by a long ago lava flow, was one of the many that ran through Etna, the tallest active volcano in Europe, located in Sicily. I shivered some; grateful it was cold in the cave. Anything above completely freezing could be a bad sign. Marco introduced me to his friend Pino, a white bat who enjoyed long naps, hanging upside down from the long fractures in the ceiling. I reached up to pet him, he was surprisingly soft.

Marco has been a tour guide of the great Etna for four years, but was then off-duty. I met him on a dune of ash in a field of snow. I was a lone hiker and far off the trails, having too much of an adventurous curiosity for a map. He figured this out soon enough, and asked if I was up for a long hike and a free tour. Definitely! 9am-6pm we hiked, soaking our socks in the snow and blackening our clothes in a brief ash shower. We walked over lava flows of old and recent eruptions, explored caves, and peaked in dangerous craters. To make it even more fascinating, I got a free geology lesson.

Panting slightly from the arduous crawl, cheeks pink from the cold, smile taking up most of my face, and heart pounding thru my chest, I just couldn’t get enough. Marco’s flashlight pointed towards the exit of the cave and I eagerly took up the lead. Then suddenly we emerged into the sun, Jack Frost’s nip in the air was warm as a roaring fire compared to the caves.

Before me stretched the entire Southeast side of the volcano, rivers of black lava leading to the city of Catania below. The craters rose in random patterns, like giant spikes on the back of a fire-breathing dragon. Older ones were covered in their own forest, newer ones were still small mountains of red and black ash. I perched on a lava bomb taller than me while Marco excitedly answered my endless questions and explained the different eruptions that caused the pimple field before us. We sat there until the sun sank behind the other side of the volcano. It was time to head down, and we had to make good time, as it was getting dark. Marco turned to head back, but I just kept looking at the view, smiling. He asked if I was ready. I told him I was ready for an adventurous decent. He smiled knowingly, “the lava river it is then.”