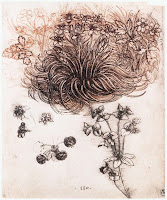 This past weekend, Professor Adrian Hoch led a group of twenty students from her Leonardo da Vinci course on a comprehensive trip through Florence and Milan, visiting sites where Leonardo lived and found inspiration. Friday morning students arrived in Florence–where Leonardo was born and begin his artistic career as an apprentice in Verocchio’s workshop–and set out directly for the Uffizi Gallery. After lunch students stepped into the Palazzo Vecchio, the imposing town hall with enormous frescoes commissioned from Leonardo, Michelangelo, and other

Renaissance-era masters. Currently there is even a debate about the possibility that an original work by Leonardo remains embedded in the wall behind another fresco later painted by Vasari.

After exploring Leonardo’s birthplace the students headed to Milan, where the artist lived and worked for over a decade at the Sforza Castle in the court of Ludovico Sforza. Professor Hoch brought students to see the Last Supper, one of the most well-known frescos in history that has miraculously withstood wartime bombing and an unsuccessful experimental painting technique. Finally, students had the chance to see Leonardo’s Codice Atlantico, the collection of his original writings and drawings that is usually kept under lock and key for preservation. This weekend however the Codice was on special display in two locations at Santa Maria delle Grazie and the Biblioteca Ambrosiana. Next weekend students in Professor Bevagna’s Roman Empire course are off to Rome!