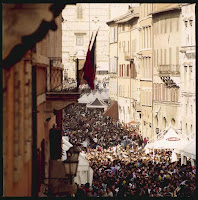 The Hotel Club Travel Blog, a subsidiary of the popular online travel engine Orbitz, has named Perugia the number 2 top European travel destination for the fall! First and foremost the blog mentioned the upcoming EuroChocolate festival, during which Perugia is completely taken over by chocolate in all its delectable forms. Described as a “well preserved medievel town” and “a major academic center,” the writers call Perugia “one of the most welcoming places in Italy.” Che onore!
Other places included in the top five fall destinations for their fabulous weather and local festivals are Parma, Italy; Sitges, Spain; Galway, Ireland; and the Beaujolais region in France.