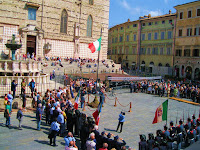 Perugia celebrated its 150th anniversary of liberation from the Swiss Guard on September 14th. To commemorate, numerous speeches and musical event were held in the center of the city. Italian law enforcement officials dressed in the traditional garb of the day as well. Professor Antonella Valoroso’s Honors class took a small field trip to see some of the celebrations in Piazza IV Novembre. This was the day the Piemontese troops liberated Perugia from the Swiss Guard of the Pope. 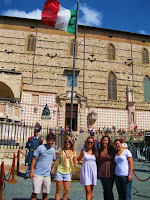 The Piemontese troops used a different strategy than had been used in the past during battles in Perugia. Instead of attacking from under the Rocca Paolina, the went to the complete opposite side of the city and attacked from the top of Corso Bersaglieri. The Swiss Guard had no time to move their cannons all the way across the city and were thus defeated.