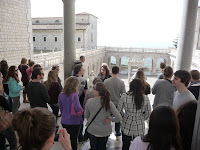 This past weekend was the semi-annual Umbra optional trip to Sorrento and the surrounding area, the Amalfi Coast. Staff members Mauro Renna and Zach Nowak met sleepy students in Piazza Italia on Friday morning at 6am, where the adventure began. A rented bus took the group (almost 50 strong) first to the famous abbey at Montecassino, where the students enjoyed a special guided tour that included parts of the structure not normally open to tourists. 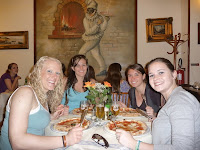 After this stop the group headed to Sorrento, a beautiful port just south of Naples, which was the “staging area” for that weekend’s trip. The Hotel Michelangelo, where the group stayed, was directly across the street from the last lemon grove in the city’s center. Saturday the students took a short ferry ride from Sorrento’s port to the island of Capri, home to (long ago) the Roman emperor Tiberius’ villa and (currently) the Blue Grotto, great food, and fantastic views of the nearby coast. Students had time to explore the island and eat some of Italy’s 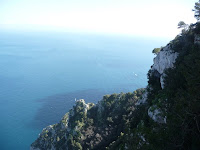 Sunday’s highlight was a stop in Naples. First the students had a guided tour of the city with a knowledgeable local tourguide, followed by a walk around the center and then free time for lunch. Many had a pizza at the birthplace of the Margherita pizza. Pizzeria Brandi. After that it was time to get back on the bus and head back home, to Perugia.