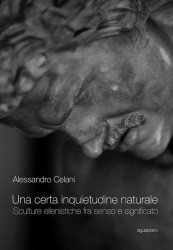 Umbra Professor Alessandro Celani has published a new book, A Certain Natural Pain: Hellenistic Sculptures Between Sense and Meaning, (Naturalis Quidam Dolor: Sculture ellenistiche fra senso e significato) focused on the birth and development of various artistic trends in the art of central Italy during the Hellenistic Age (3rd to 1st centuries B.C.E.), including: baroque, classicist, mannerist, etc. Various individual statues, portraits, and sculptural groups from Latium and Rome are described, interpreted, and put in relation with their socio-cultural background. The method, closer to the sociology of art than to pure archaeology, tends to bound the scholarly categories to each other rather than sharpening individual viewpoints and conclusions.

The first part of the book is methodological, with in-depth incursions into the theory of art (ancient and modern). The second part is based on three major topics: the male nude (honorary statues from Formia, Minturno, Rome), portraits (from Terracina and Rome), and the drapery on female statues (from Palestrina, Rome, the Greek islands and Asia Minor). A short appendix covers mythological statues and groups (from Sperlonga and Rome).

The last chapter is a long visionary reflection on the relations between statues, architecture and human beings, from Cicero and Lucretius to Hanna Arendt.

The iconographical documentation is almost entirely new (black and white photographs by the author).