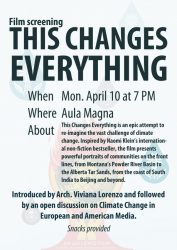 The screening was accompanied by a brief lecture by Viviana Lorenzo on climate change and the way it is generally presented by European and American media outlets.

This week, the Umbra Institute hosted a Film Screening of This Changes Everything, an Avi Lewis film. The screening was accompanied by a brief lecture by Viviana Lorenzo on climate change and the way it is generally presented by European and American media outlets.

This Changes Everything is a film inspired by Naomi Klein’s non-fiction bestseller, by the same title. The film was shot in nine countries across five continents and seeks to show how various communities are directly affected by industry pollution and climate change.

Lorenzo then led a discussion, after the brief lecture and film, during which students commented on climate issues that concerned them, such as the highly politicized environment in which climate change data is often presented in American media. One student, Valen Bidleman, then made an interesting comment that turned the course of the conversation when he said that “the film seemed to target viewers who were already interested in climate change.” Students were then left with the question, “how can one present an idea that is accompanied by strong conviction in a way that will inspire the opposition to listen?”

The Film screening event was organized in collaboration with the Umbra Voice Journalism and Communications Club.
Click here to learn more about Umbra clubs.