Gender and Personality: Visiting Professor Leslie Burton Presents Study to the University of Perugia in Italy 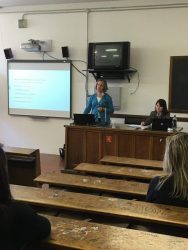 Professor Burton presenting at the University of Perugia

On May 18th, Umbra’s visiting Professor Leslie Burton (University of Connecticut) presented her study on “Gender and Personality”. A large number of graduate and undergraduate students at the University of Perugia were in attendance, as well as Professor Burton’s students who took part in this summer’s Faculty-Led study abroad program at the Umbra Institute.

The study was meant to analyze “Gender differences in personality”, specifically aggression, in a sample of university students. Professor Burton pointed out that aggression has played a crucial role in human evolution, as in acquiring food and other resources and defending family members. In modern society, it appears in a number of different behaviors: not only physical aggression, but also competition, as well as verbal and relational aggression.

“The conclusion that I got from this is that men show more physical aggression than women and women are more verbally aggressive…Men showed more egocentricity and less pressure from social support than women, but, surprisingly, there were no significant gender differences when it came to relational aggression.”

Calvi then went on to describe the Big Five Model and the significance of openness, conscientiousness, extroversion, agreeableness, and neuroticism; all of which were discussed in detail during Professor Burton’s presentation.

Click here to learn more about faculty-led opportunities at the Umbra Institute.