To Be, or Not to Be, in Umbra’s Theater Club 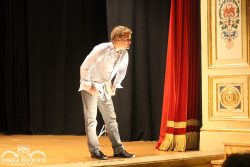 A past theater performance at Onaosi Theater in Perugia

In the fall of 2015, the Theater Club took Umbra by storm as students performed for the community at the elaborate Onaosi Theater in Perugia. Since their first production, the club has continued, each semester, allowing participants to take part in dramatic, comic spettacoli.

“The whole theater club experience was an enjoyable one! Every meeting we were given the opportunity to make the script our own, and therefore, work off of each other within the context of the play,” said Sinarely Minchala, a participant in the club’s Fall 2016 performance.

Sinarely, along with other Fall 2016 participants, including Emily Quinn and Katie Bowman, felt that the best way to share their enthusiasm for the club was to create a video of some of their favorite moments as they rehearsed The Complete Works of William Shakespeare (Abridged).

Last semester’s students would like to thank Giuliano and Cristiano for the humor, enthusiasm, and Shakespearian knowledge that they shared throughout their theater experience.

Current students interested in participating in the club should contact Cristiano (in the Library) or Giuliano (in his office on Umbra’s first floor).