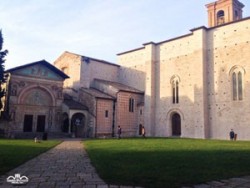 What began as a low rumbling of murmured acknowledgment in response to this statement quickly erupted into a dissonant chorus, not unlike the colorful tempest that had initiated it.  Disagreement abound in our Aesthetics class at the Accademia di Belle Arti – a passionate, excited disagreement that never really ended, but merely underwent a change of topic from day to day. I loved it.

It turns out, a theoretical class about the philosophy art included a lot of very real debate on topics such as the definition of beauty, the grotesque, and the profound emotional impact of both.  These ideas also found their way into the practical class I was following, Artistic Anatomy, where we practiced drawing the body not only as accurately as possible but also contorting and exaggerating it into different states of idealization and demonization.

And sometimes we just drew what we wanted, “like you did when you were children,” as my professor would say.

He and my Aesthetics professor were both lively, engaging, and understanding of the language barrier I sometimes experienced.  Throughout each lesson they combined a respect for the past with an excitement for up-and-coming artists and students’ new ideas.  Many of the “contemporary masters” we studied gave presentations in the Accademia’s library and lead live drawing demonstrations that lasted for hours.

Here in Perugia and especially at the Accademia, Italy’s centuries of contribution to the worlds of painting, sculpture, and aesthetic philosophy are constant, palpable sources of inspiration.  I feel incredibly fortunate to have experienced first-hand the pride artists here have for their work.  And I’ll definitely never think as the ocean as just blue again.