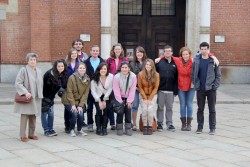 Earlier this semester, students enrolled in AHST 371: Leonardo da Vinci: Artist, Genius and Scientist traveled to Florence and Milan to see first-hand works by the Italian Renaissance Master, Leonardo da Vinci. The Uffizzi, Palazzo Vecchio, Castello Sforzesco and the Cenacolo of Santa Maria delle Grazie were all on the schedule for a very busy, but engaging weekend. In this bonus installment of our Student Voice mini blog series, we asked Dominic Baldoni, an Art History and Music double major from Lebanon Valley College, to share his experience with us.

It’s difficult to choose what the “most exciting” part of this fieldtrip was, but I think I can narrow it down to two things – getting to visit the Uffizi Gallery in Florence and Il Cenacolo (Last Supper) in Milan. I loved going through the Uffizi and recognizing the works that I had studied in previous classes and it was great to gather new information on not only the Leonardo paintings on display, but also the Botticelli, Verrocchio, and Michelangelo works as well. In Milan, Leonardo’s Last Supper definitely lived up to my expectations. Getting to see the massive fresco in real life is much more inspiring than on a PowerPoint slide.

Many of the topics we’ve been studying in Dr. Hoch’s class have dealt with not only Leonardo’s innovations and specific styles of painting and drawing, but the reasons behind his very specific use of symbology, and themes that have related to his self-appointed task of describing and understanding the world he lived in. Dr. Hoch showed us around the galleries to the homes of many paintings we had seen in our lectures, and for me, it was a chance to put my memory to the test – not only trying to remember artists, dates, and titles, but to recognize the themes, motifs, and history that influenced so many of Leonardo’s own works.

In terms of challenging and supporting what has been discussed in class, I definitely admire Dr. Hoch’s own knowledge and references when it comes to Leonardo scholars. I believe there is always more than one reason or theory behind an artist’s stylistic influence. Leonardo’s characteristic use of sfumato and chiaroscuro are staples in Renaissance art class discussion, but where did these influences come from? Is it simply Leonardo’s hyper-realistic way of representing the natural world, or is he consciously trying to change the 15th century Italian style of painting? I always play “devil’s advocate” in situations like this, and it often gets me in trouble… Either way, it is always nice to devote some time in front of these paintings to not only look at the final product, but to look at the work in progress. These masterpieces weren’t painted in a few minutes – the items weren’t pasted in from a clipboard. Every brushstroke was purposeful, and every composition had a purpose – I just think it is fun to ask, “Why?”