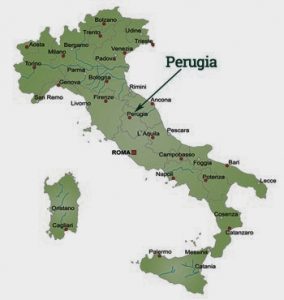 At first, Perugia looks like something from a fairy tale. It sits high atop a hill flecked with charming pink and yellow roofs, encircled by an ancient crumbling wall. Nestled halfway between Rome and Florence, the city is the capital of Umbria, dubbed the “green heart of Italy” on account of its verdant mountains, soft valleys, and undulating hills.

But Perugia is a place where magic meets modernity. Though the city has preserved its Etruscan walls, medieval churches, winding cobblestone streets, and an impressive smattering of Renaissance and Baroque architecture, it is also vibrant and contemporary. Corso Vannucci, the main thoroughfare, hums with energy from restaurants, jazz cafes, piano bars, theatres, cinemas, pubs, museums, and art exhibits. In Perugia, antiquity blends seamlessly with the present day.

Nicknamed the “University City,” Perugia boasts a thriving international student scene. Each year, thousands of Italian and international students flock to the city to attend the Università degli Studi di Perugia, the Università per Stranieri di Perugia, and the many studio and performing arts schools in the area. Unlike large cosmopolitan centers such as Rome or Milan, Italian is heard on every street corner and in every shop, making the city a gem for language students seeking a truly immersive experience.

Perugia is one of Italy’s best-kept secrets. It has a seductive power, evidenced by the countless Umbra students who return time and again to sample its manifold delights. Visitors beware: once bewitched by Perugia, it is impossible to ignore the city’s siren call!

A Medieval City with a Modern Vibe
Discover more about Perugia