Cinecittà: A Dive into the History of Cinema

Close your eyes and pretend you just got off the short train ride from Perugia to Rome. Take a deep breath in; inhale the new city smell, bask in the warm sunny glow of Rome weather. With only one day in Rome, what do you visit?  Having grown up in New York City, I wanted to see something that connects to Italian History and Culture but without the hundreds of other tourists elbowing me out of the way. Well luckily, my Independent Film Class: History of Italian Film and Society, taught by professor Lorenzo Picchi gave me the best assignment, to visit Cinecittà. From the train terminal, I found my way to the A-line of the Rome metro system and rode the train for 14 stops, to the outskirts of the city. When I first got off of the train and looked around it felt deserted. There were minimal cars, people, and buildings, but as I turned around to the Cinecittà opening I saw a large school group outside waiting, and other Italians waiting to go in the historical film studio sets. 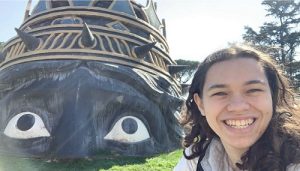 I learned after I entered that the only way to see the sets is to go through an hour and a half tour, but there are only two tours in English, at 11:30, Saturday and Sunday. Not knowing this, I got there at 12:05, just missing the English tour, so I went on the Italian one at 12:30. Here I was fully immersed in the Italian language, no use of google translate or by standards could help translate for me, so auditorially I couldn’t understand what was happening. But looking at the sets, walking through Italian history I was immersed in the past, completely immersed in what the sets once meant. I loved walking through the sets knocking on everything I passed as what looks so real, was completely hallow, fooling millions of viewers and countless patrons visiting the sets. 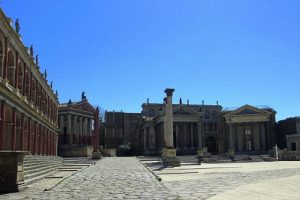 I proceeded to walk around the grounds and go to the museum on site. The museum is filled with facts about how a film is made, costumes from films, and parts of the history of Cinecittà. The spectacular nature of Cinecittà sent me down a deep dive into its historical nature.  It was originally created by Benito Mussolini in 1936-1937, as a way for the fascist government to control the Italian film industry, and help shape a more fascist society. After all, Mussolini once said “Cinema, the strongest weapon” understanding the power film had in culture. But after the Allies won World War II the facility was closed, which allowed for the spread of Neorealism (Neorealist films were often filmed on location rather than in sets which allowed for a more authentic representation of Italian civilization.) It was until the 1950s, that the sets were rebuilt and opened for use. For roughly 20 years Cinecittà sets held some of the most famous Italian directors and very prominent Hollywood films. However, as television grew, the quality of films coming out of Cinecittà declined. As a result, the studio became obsolete. In recent years, Cinecittà has been used to film Italian television shows, but it is mostly used as a museum, an homage to the Golden Age of Italian Cinema. For any film enthusiasts, I highly suggest the short train ride to Cinecittà, attend the English-speaking tour, and fill me in on what I missed.