It is the hope of all educators that a semester abroad enhances a student’s education. So often study abroad opportunities are attacked as a “semester off” for students to travel the world before 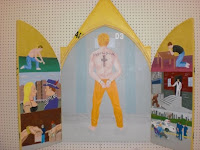 At the Umbra Institute, however, professors encourage students to draw upon their previous coursework in classroom discussions and challenge them to think beyond classroom material. We received notice that one former student, Mark Turpin, integrated the experiences from studying art history in Italy into one of his senior art pieces upon return to Wabash College in Indiana. Turpin studied at the Umbra Institute during the fall 2007 semester.
Turpin included traditional iconography in a modern adaptation of a triptych. Several scenes of Turpin’s triptych mirror works by Michelangelo (The Pieta and Creation) and Piero dell

a Francesca (Duke of Urbino portrait). As stated in Turpin’s statement: “My paintings incorporate Renaissance themes and imagery, but superimpose not what was culturally acceptable in Renaissance times, but rather what we today as a culture publicly accept through our images of violence, sex, and drugs seen in our mass media. By exploring this dichotomy of Renaissance and modern popular culture, I hope the viewers can decide for themselves the trouble that might be associated with this type of blind societal acceptance of popular culture which has become so commonplace that we forget what implications it might have.”
In photos: detail of triptych; Turpin discusses artwork at Wabash College Celebration of Student Research.