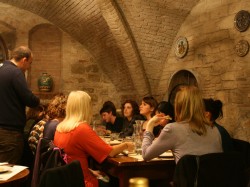 As Umbrian food expert Andrea Mecozzi says, the best way to get to know a city is to taste it. Last night more thantwenty-five Umbra students went to a unique Perugian restaurant, Al Mangiar Bene, which uses only organic and local foods. Mecozzi (who, as he pats his belly, insists he’s not an expert but rather “just likes to eat”) explained where the Perugian area fits into Italian gastronomic regionalism – this just after he had said that there is no such thing as “Italian cuisine” but rather only lots of regional cuisines.

After this brief introduction students got right down to the eating. First out were two unsalted Umbrian breads, pane sciapo and the famous torta al testo (the latter cooked on round, flat pieces of stone), followed directly by a variety of cold cuts, among them prosciutto andcoppa. Patè was next, followed by tripe (students liked it, then reconsidered when they found out what it was) and two pasta dishes.These were tagliatelle (a long, wide pasta whose name comes fromtagliare, “to cut”) with duck sauce, and the typical Umbrian worm-like pasta, umbricelli.

Students were not left to go thirsty, and wine included an organic, unfiltered Grecchetto, once again typical for the region, and a national premier of the Fragolino Bianco, which tasted strongly of strawberries. Mecozzi finished up with the Perugian dessert cake torcolo (made in honor of San Costanzo), and told a story about Perugia’s patron saint to be celebrated on January 29.