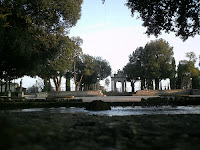 Umbra Institute students and local Italians filled the spacious frescoed rooms of Umbra building in Via Marzia as the first meeting of the Italian-English language exchange program, known as TANDEM, began this

Tandem offers Umbra students the opportunity to converse in Italian with and get assistance from local students while assisting them with their English. “It’s a great way to learn to speak Italian like a native” said Jen Dirvianskis, an Umbra student.summer. This is just one part of the Intensive Italian language through Culture program offered at Umbra each summer and directed by Professor Robert Proctor of Connecticut College.

prestigious Accademia dell’Arcadia, an Italian literary academy founded in Rome in 1690 by Queen Christina of Sweden.

Powerful remnants of the past still exist today in the palazzo. The aula magna is covered with frescos representing ancient Greek Arcadia painted in the early 19th century, and meticulously written on the windows interior shutters are the academy’s bylaws and philosophy. As one sits in the room it is easy to imagine the setting group of authors and composers who met every weekend to impress and delight each other with their stories, poems and prose.

The Accademia dell’Arcadia was appropriately named by its members who sought to imitate in literature the simplicity of the ancient shepherds, who were supposed to have lived in Arcadia in the golden age, divinely inspired in poetry by the Muses, Apollo, Hermes and Pan.

The Academy of Arcadia counted among its members some of the principal literary men of the time, including Menzini, Redi, Metastasio, Rolli, Guidi, and others. The famous composer George Frideric Handel is known to have often attended the meetings and symposia of the Arcadian Academics when studying in Italy.

Just behind the Umbra building at the end of Corso Cavour was the Giardini dell’Arcadia, which still exists today under its new name Giardini del Frontone.

Future Tandem events this summer will take place at the Umbra facility and throughout the streets and piazzas in Perugia. Check back again soon to see the latest updates for the Tandem programs.