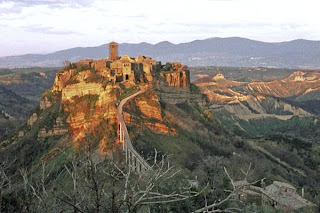 This weekend Umbra students will get a glimpse of some of the lesser-known hill towns of central Italy. The first stop on the itinerary is the fascinating Civita’ di Bagnoregio, also known as “la citta’ che muore,” for its diminishing population. The town dramatically juts out of the valley atop sheer cliffs and is accessed only by a long pedestrian bridge. Besides being known for its breathtaking location, it’s also the birthplace of Saint Bonaventure.

After a full-course meal at a local restaurant, the afternoon will be spent in the old medieval quarters of Viterbo, once a long-time residence of the popes. Afterward, the group will head onward to stunning Orvieto where they will spend the night in a charming hotel in the historical city center. Sunday morning the group will be given a tour of Orvieto by Umbra’s own Professor Alessandro Celani, who teaches History of Early Christianity and Art History. Orvieto’s main attraction

is its duomo or cathedral—one of the most spectacular examples of Gothic buildings in all of Italy.

Professor Celani will accompany the group from Orvieto to nearby Todi where first the students will recharge on yet another full-course Italian meal. Later, on a full stomach, students will see the fairy-tale like town of the lovely Todi before heading back to Perugia.