The Umbra Institute is excited to announce the release of two new books by visiting Professor Alex R. Hybel, Professor of Government and International Relations at Connecticut College.

This discussion sets the stage for the multiple objectives that Hybel, along with his Connecticut College collaborators attempt to fulfill: describe foreign policy-decision making processes generated and utilized by various presidents; gauge the explanatory value and theoretical applicability of leading foreign policy decision-making models; incorporate discussed models in relation to the president’s cognitive system and dominate mindsets of the times; and assess the quality of the designed foreign policy decision-making processes. Ultimately, with these works, Hybel aims to “introduce […] readers to core foreign policies that have placed the United States at the forefront of world affairs” (p.2).

The Umbra Institute will be hosting a presentation by Professor Hybel on these manuscripts on Monday, March 24th at 7pm in the Umbra Library (Piazza IV Novembre, 23). An open discussion with the author will follow the presentation. 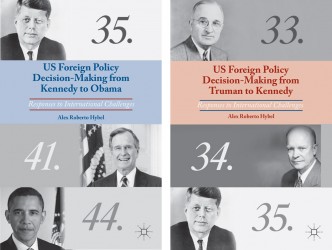