A Second Time Around… 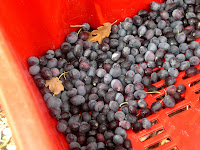 This week saw encore presentations of two Umbra events. First, on Sunday, a group of students headed out to Villa Monticelli and its olive orchards. Though the ground was too wet for picking, students took a walk through the vineyard and got a lesson in olive botany and cultivation from orchard manager Roberto Orazi.

The highlight of the trip, other than the visit to the olive mill, was again the lunch around an open fire. On the menu was the typical fare of olive orchard workers: sausages and toasted bread with salt and fresh olive oil. Fresh oil, unlike its cousin that has been sitting on

the supermarket shelves for months, is like a rock band playing in your mouth. It’s intense and rough, unlike the finer notes of aged olive oil. The sausages were good, but the bruschetta was better, students agreed!

Monday night saw the second Pizza Workshop. Back by popular demand, the workshop was a combination of theory and practice. Staff member Zach Nowak, himself a former pizzaiolo (pizza man), took students to Pizza&Musica, one of Perugia’s best-kept secrets. At this little hole-in-the-wall pizzeria students heard a short lecture on the history and biochemistry of pizza, and then got to try it
themselves. Robert Celentano and Gina Masarik were two of the students who spread the dough and even put in the oven – both made perfect pizzas and the Neapolitan pizzaiolo Felice declared that they had “tomato sauce in [their] veins.” Lecture and lab build up a hunger, and after these attempts all sat down to a dinner of pizza, tiramisu, and of course, caffè.