Holding Class in the “Eternal City” 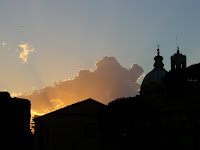 Last weekend professor Giampiero Bevagna held his Roman Empire class in the most inspiring setting possible: among the ruins of the “Eternal City” herself.

Friday morning found students taking a guided tour of the Augustinian “Ara Pacis”, or Altar of Peace, commissioned by the Roman Senate in 13 B.C. From there it was on to the architectural layer-cake tha 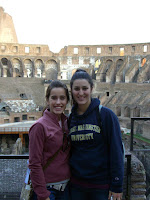 t is the Roman Forum. As always, students couldn’t help but stare in awe at some of the West’s more timeless achievements: the Arch of Septimius Severus, the Temple of Saturn, or the remnants of the Temple of Caesar… Professor Bevagna then led students to the strangely calm gardens of the Palatine hill, whose central location offered sweeping panoramas of Rome’s entire ancient district. As the Sun was falling students toured the ever imposing Coliseum. 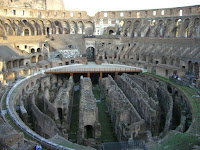 Saturday morning wasn’t spent in Rome, but rather in her once crucially important commercial satellite, Ostia. As legend would have it, Ostia was founded by Rome’s fourth King, Ancus Marcius, some time during the 7th century B.C. Over the course of nearly two millennia Ostia was buried beneath the sands of time, only to be literally unearthed in the 19th century. What remained pays spectacular tribute to the Empire’s past, a perfect image of the classical Roman city. With the tour concluded, students had the afternoon to eat lunch by the sparkling Tyrrhenian Sea, under a warm November sun.