An Afternoon in Italy’s Green Heart… 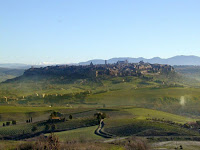 Last Friday Umbra students hopped on a bus bound for Orvieto, without a doubt one of Italy’s most striking cities. Perched on a butte of volcanic tuff and protected by towering vertical walls made from the same stone, the once major center of Etruscan civilization now plays host to one of the greatest examples of Gothic architecture in Europe. Touring Orvieto’s travertine and basalt striped Duomo, with its reaching and magnificent façade surely made for the most breathtaking moment of the day, although the views offered from Orvieto’s 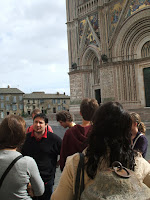 Having taken a tour of the city’s historical center, it was off to the small and imminently charming village of Titignano, where students were treated first to a wine tasting, and then to a lunch boasting course after course of traditional Umbrian dishes, which included, among other things, pasta with a wild hare sauce and papardelle with a boar ragù. Contentedly full and certainly ready for a mid-afternoon nap, students boarded the bus and headed back to Perugia. What a day!

(in pictures: a panoramic view of Orvieto; Professor Giampiero Bevagna leads students on a tour of Orvieto, including it’s famous Gothic cathedral)