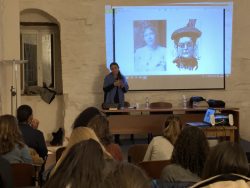 On February 19th, the Umbra Institute hosted “An Evening with Idanna Pucci,” author of The Trials of Maria Barbella: The True Story of a 19th-Century Crime of Passion. The novel tells the compelling story of Pucci’s great-grandmother, Cora Slocomb, who in 1895 read about the case of Maria Barbella, a 22-year-old Italian immigrant who worked in a New York City sweatshop. Barbella was convicted of killing her abusive lover and was sentenced to be the first woman to die in the newly invented electric chair. Convinced that as a woman and an immigrant, Barbella had been treated unfairly by the legal system, Slocomb took up her cause, hiring an attorney who managed to get his client retried and acquitted. Slocomb, at the same time, launched the first national campaign against the death penalty.

Pucci began her presentation by urging students to embrace their sense of curiosity. She explained that it was two sentences in a short booklet written by her great-grandfather that piqued her own curiosity about her great-grandmother. Those sentences made an obscure reference to Cora Slocomb’s role in a legal case from 1895. With only this information in hand, Pucci began a journey of research and discovery that took her from the New York Public Library to a cemetery in Queens, New York! Over many years, she came up against dead ends and made unexpected connections—for example, the role of Thomas Edison in the introduction of the electric chair. Through this extensive process that required great perseverance, Pucci unearthed a remarkable part of her own family’s history while also tracking down Maria Barbella’s descendants. Pucci’s curiosity and perseverance paid off as she eventually located Maria Barbella’s own great-granddaughter and traveled with her back to the southern Italian village of Ferrandina, where Barbella’s story began and where a large mural now immortalizes her.

This event was one of the co-curricular activities sponsored by the Institute’s Multicultural Psychology Program (MPP). It was a great opportunity for students to enhance their exploration of how cultures perceive and treat people who are different from them. For MPP student Natalie Lozito (University of Connecticut), what was especially fascinating about the presentation was seeing that Pucci was able to unearth the stories of her great-grandmother and Maria Barbella through “such an impressively persistent research process that led her to an absolute gold mine.” Similarly, what impressed MPP student Katherine Sokol (University of Connecticut) was “how one woman’s curiosity helped an entire family come together.” She found it “eye-opening to see that if you have a curiosity, and remain persistent, then anything is possible.”