Carnevale on both shores!

This past weekend Umbra Institute students headed out for the traditional Italian Carnival (carnevale) celebrations. Most Americans think of Venice as the obvious destination — and indeed the city has been the spot for carnival celebrations since the Grand Tourists of the 1700s. The Umbra students who 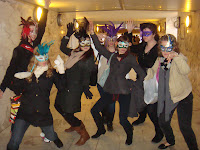 crossed the lagoon to the island city weren’t disappointed: masks, music, and some subdued mayhem abounded.

Other students took the path-less-traveled (at least by foreigners) and went to the Tuscan city of Viareggio on Italy’s west coast. Viareggio, considered by Italians to be the “real” carnival, hosts a weeklong festival atmosphere which culminates in a parade of huge floats that move along the city’s main drag amid music and applause of the onlookers.