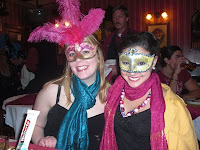 With Martedì Grasso (Fat Tuesday) yesterday, Carnevalecame to an end. Children and adults alike celebrated during the day and night by wearing costumes, masks, and painting their faces. Last weekend, some fortunate Umbra students even found themselves at the celebration’s epicenter, Venice, masquerading about in good tradition. Carnival typically involves a public celebration or parade combining some elements of a circus, masque and public street party. People often dress up during the festival, which mark an overturning of daily life. 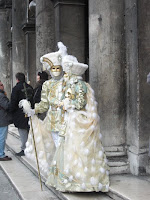 portunity to celebrate and to use up special foods not allowed during Lent. The term Carnevale is in fact derived from older Italian, meaning to “remove meat” literally “raising the flesh”, and thus raising meat from the diet for the season of Lent. The Lenten period of the Church calendar, being the six weeks directly before Easter, was marked by fasting and other pious or penitential practices. Traditionally during Lent, no parties or other celebrations were held, and people refrained from eating rich foods, such as meat, dairy, fats and sugar. While it forms an integral part of the Christian calendar, particularly in Catholic regions, some carnival traditions may date back to pre-Christian times. The ancient Roman festivals of Saturnalia and Bacchanalia may possibly have been absorbed into the Italian Carnival.