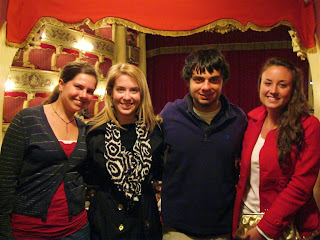 This past Tuesday night, students in Professor Antonella Valoroso’s Honors class spent a night at the Opera. The show of choice: L’Elisir d’Amore (performed at Teatro Morlacchi) written by Gaetano Donizetti in 1832. Donizetti wrote this opera in only seven days after the previous opera writer at the Teatro della Canobbiana in Milan had quit, Professor Valoroso explained during intermission. It is now one of the 20 most preformed operas in North America. With its light-hearted music and silly love tale, students were enchanted not only by Donizetti’s work but also by the theater itself. Teatro Morlacchi was built in the 1800s and became the theater of Perugia’s new middle class.

Students laughed along with the rest of the audience at the story of the poor, enamored peasant Nemorino. He is deeply in love with Adina and buys a L’Elisir d’Amore (love potion) from the traveling salesman and quack, Dr Dulcamara. Unbeknown-est to him, the bottle of love potion contains only wine! Filled with delightful songs and the famous aria “Una furtiva lagrima” students needed no L’Elisir d’Amore to fall in love with this comedic opera!