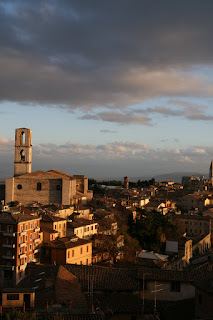 The first week of Umbra Elective classes began with a bang as students had a busy week this week, both in and outside the classroom.

Sunday students participated in various outings in Umbra–one at the nearby lake, Lago Trasimeno and another in Assisi. While the historical walking tour was rained out on Monday (and is to be rescheduled) the Umbra Gelato Night on Tuesday was a big success! Thursday a few students attended a charity show at Perugia’s noble theatre, Teatro Morlacchi and this morning thirty-eight students left for a three day trip to Pompeii, Sorrento, Capri and Naples!

Next week a pizza night (on Umbra) will be held on Tuesday night at Pizzeria Paiolo.

Here’s to another great week in Perugia at Umbra!