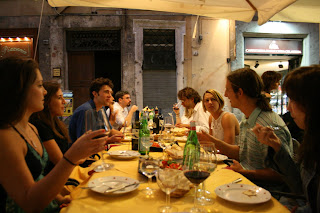 Several of the students were lucky to have spent August traveling around Europe and Italy and thus avoid the usual first-night jet lag, and the others are catching up quickly. After the two and a half hour ride up to Perugia from Fiumicino Airport in Rome on Monday afternoon, students had a chance to relax last night and get to know each other

over dinner at Cafe di Perugia. Umbra professors Francesco Burzacca and Roberta Mugno, who will conduct weekly tutorial sessions to supplement the regular courses at the Stranieri, as well as staff members Zach Nowak and Rachel Bethany did their best to reassure the students that this morning’s placement exam at the Università di Stranieri would be a breeze, but even so we spied some last minute trapassato remoto cramming! In boca al lupo to the Fall 2009 Full Immersion students as you start out with your studies at the Università.