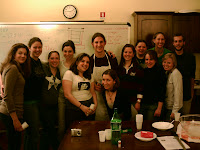 Yesterday night Umbra students didn’t eat their curds and whey, they separated them. In another of a series of food-making workshops, Umbra staff member Zach Nowak lead a cheesemaking class in the kitchen-classroom of the Institute’s Via Marzia building. Students first learned the theory of cheese (how early pastoralists needed to be able to store their milk, the role of bacteria in cheesemaking, how rennet works), and then used rennet to separate, quite literally, the curds from the watery whey. Nowak, an amateur cheesehead, also showed the class some of his own fresh cheese, which they spread on bread before concluding the class. Yum! (photo by Frank Seijas)