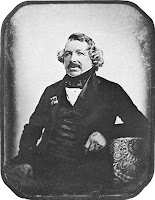 Louis Daguerre announced the perfection of the “daguerreotype,” the first photograph, on 7 January 1839, and as he recounted the procedure, notes about it were relayed by people in the hall of the French Academy of Sciences to those outside and people were making their own daguerrotypes by that night. For years the Umbra Institute had its own darkroom in Via Danzetta, where students would transfer photographic paper from one tray of chemicals to another, in a process not too radically different from Daguerre’s.

But the Millenium and its technological wonders have caught up with this. The daguerrotype

gave way to the cyanotype, the cyanotype was replaced the wet plate process, and in 1884 George Eastman (the founder of Kodak), developed film…and that’s where we’ve been ever since. Until Fall 2008, when the Umbra Institute made the switch to digital photography. Professor Philippa Stannard now teaches two courses, beginner and advanced, and instead of dodging and burning under an enlarger, students use these tools in Photoshop. The result? We think you’ll agree that it’s spectacular.

1. Louis Daguerre 1844. 2. “Boulevard du Temple”, taken by Daguerre in late 1838 in Paris, was the first photograph of a person. The image shows a busy street, but because exposure time was over ten minutes, the traffic was moving too much to appear. The exception is the man at the bottom left, who stood still getting his boots polished long enough to show. 3. “Untitled” photo by Umbra Alumni Jennifer Dirvianskis.