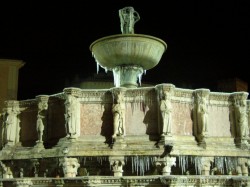 Perugia, normally boasting countless outdoor cafes, sheltered by looming white umbrellas has now made the the unmistakable transformation into winter mode. What’s normally a symbol of social encounters–the beloved fountain–the perfect meeting point between friends and romantics is now frequently found uninvitingly iced over. Long gone seem the days when Corso Vannucci, a crowded, vibrant street full of shoppers and elegantly dressed Italians stroll up and down the street or as they say in Perugia “fare una vasca“. The atmosphere on the main street seems to have lost its hustle and bustle.

There’s good reason for it. Corso Vannucci makes for the perfect wind vane. Only a week ago Perugini were walking around in unzipped light jackets, enjoying the balmy 50-degree temperatures. The southerly African winds settled in, giving Perugia an almost spring-like effect with its cloudless days and warm sun. However, the winds changed and the hopes of an early spring were all too soon squelched by the “bora”, what the Italians call the frigid Siberian winds that unexpectedly rip down Corso Vannucci.

Yet despite the single-digit temperatures there’s a beauty to it all. Yes, Perugian winters definitely have their reputation for being cold. But there’s a side of winter here in Perugia that people just can’t find elsewhere. Where else outside Great Britain will you find enough varieties of hot tea to make the Queen of England drool? For chocolate-lovers, Perugia is the capital. Hot chocolate here is the perfect remedy for the chilly temperatures. Imagine thick, hot, chocolate pudding served with a spoon and a dollop of homemade whipped cream on top. There are enotecas galore–what better to warm up to than a nice full-bodied glass of red Italian wine? There are natural hot-springs, once used as Roman baths, still in use that are within an hour’s drive. And let us not forget the visible snow-covered mountains in the distance, only an hour and a half away from Perugia, beckoning skiers.

Some say Perugia is one of the few cities that maintain its beauty and charm in every season. The frozen fountain against a snowy gray sky creates an atmosphere all its own. When the snow falls silently and the air is still on Corso Vannucci there is winter magic in the air…the kind of magic that is only broken by giddy Italian school kids caught up in the excitement, yelling and throwing snowballs. In fact, it’s hard not to get caught up in the excitement. The excitement of the possibility of seeing an Etruscan town dotted with colorful medieval architecture, with all its arches and cobblestone covered in a glorious blanket of snow. For now, the warm sunny days of summer are forgotten and the cold Perugian winter is celebrated and even welcomed. Afterall, it’s only January and the fountain has only frozen over once. The best of winter is yet to come.

In photos: the Fontana Maggiore in Perugia’s main piazza is covered in ice; professor Cindy Clough and her dog, Desire, arrive at the Institute bundled in hats and scarves.