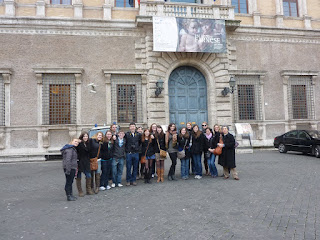 Last Friday, Umbra students accompanied by Art History Professor Dr. Adrian Hoch took a tour of the Palazzo Farnese in Rome. Palazzo Farnese was once the home of the Farnese family and has housed the French Embassy since 1874. Professor Hoch described the wealth and vision of the noble Italian family and their architects, which included Antonio da Sangallo the Younger and Michelangelo.

The imposing building has virtually never been opened to the public, so Umbra students were able to be part of a very special moment in “art history”. The exhibition includes 150 masterpieces from Naples and France on display in the beautiful halls of the upper floor, but the highlight of the visit was a chance to view the breathtaking “Loves of the Gods” fresco cycle by Annibale Caracci in the West Wing of the palace. The exhibit runs through April 27th.