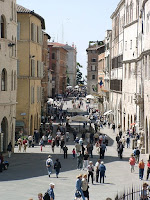 Perugia now has returned to some semblance of normality after the August invasion of daytrippers. The Dutch no longer crowd Caffe’ Morlacchi, the Steps of the cathedral are now host to returning university students, not groups of Japanese schoolchildren. The holidays are over and its time for the newest of the city’s temporary citizens to arrive. Tomorrow the first group, students who will participate in the Full Immersion program, then Friday the rest of the Class of Fall 2010. The staff looks forward to sharing the city they love (and live every day) with you!
A presto! (See you soon!)
The Staff of the Umbra Institute