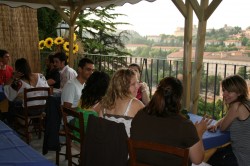 Last night’s Tandem Exchange abounded with temptations. At Ristorante Eden, Umbra students were enticed by warm bruschettasprinkled with melted cheese and tomatoes, enchanted by glasses overflowing with luscious wine, and drawn in by the mystical allure of Perugia as seen from the restaurant’s picturesque terrace overhanging the ancient city wall. And to top it all off, the night air was filled with a fabulous fusion of mother tongues that would put even the Tower of Babel to shame.

Tandem provides a safe and fun environment for students to meet and speak with native Italians. Over aperitivi, program participants traded idiomatic expressions and slang terminology in both English and Italian, enjoying the opportunity to learn 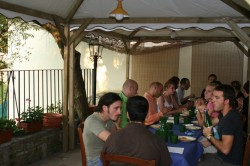 things that can’t be gleaned from even the most insightful textbook. Popular movies, hobbies, and Paris Hilton (a serpent of sorts) were all among the topics discussed. Some students were so enamored with the atmosphere that they stayed to eat dinner at Eden. Apples, however, were not on the menu.

At the end of the evening, no one was expelled from paradise. But students trickled out of Eden with full stomachs and enlivened minds, eager to sample the diverse merriments the night offered, emerging into Perugia’s starlit night fully clothed.