That Time of Year Again…

This is my favorite time of the semester.

The students are studying for finals and putting the final touches on research papers, but as a staff member, I get to witness the results of individual and collective experiences coming to the forefront of life at Umbra.

This period started last week when students in both creative writing classes had the opportunity to take the stage and share their reflections of living in Italy. Their professor, Cindy Clough, s 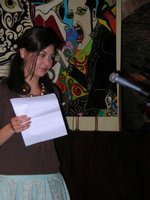 tarted the open-mic night last fall to coincide with the published literary anthology which is distributed at the end of the semester.

The first student to approach the stage was Bree Barton, whose writing has been published previously on this blog. It was really no surprise that Bree went first – as a seasoned writer and an outgoing person – to break the ice for others to follow.

Then there was Rachel Slajda who described in detail her experience of examing the famous statue of David in Florence. This is an image we’re all familiar with, but few take the time to deconstruct the statue into the details which Rachel did. We heard Ashley Olentine utilize imagery of her favorite gelato to describe Italy’s marble churches. And we all laughed at Brad Kavo’s story as the “night traveler” learning the good and bad of travelling throughout Italy. It seems we have all been “night travelers” at some point.

Perhaps the best moment of the night was watching Patrice Forrester approach the stage. I’ve watched Patrice since she arrived in Italy – she’s shy, but incredibly positive about every experience she’s had. I have learned not to misinterpret her quietness as being passive; she’s has been actively observing the culture around her. Patrice’s piece began by describing her nervous emotions in the United States – not yet on board an airplane! But quickly her piece – reflecting her own experience in 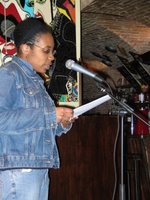 Perugia – turned to acceptance and to opening herself to be impacted in ways she was previously unfamiliar.

It seems like Patrice just stepped off the plane, but quickly four months have passed. For students like Patrice this is a timeless experience. Students have been immersed in a foreign language and culture, they have travelled around Italy and Europe, they have developed new friendships, and hopefully learned more about themselves.

Four months is not a long period of time, but within these few months, students develop and change with the challenges presented to them. The open-mic night was a bittersweet event, but at this time of the semester it reminded me how impactful a semester abroad can be for these students.
(by Mark Shreve, student services associate)