The Sun Always Shines in Tuscany 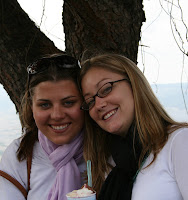 This weekend Brother Sun vacationed with 39 Umbra Students, leaving the rest of Italy wet and without his warm company. Then again, Tuscany does tend to attract all sorts of visitors…

Students spent Saturday morning in the undulating Cecina valley; home to the Etruscan and medieval haven Volterra. Students had an afternoon to wander the ancient stronghold’s tiny streets, and a few even chose to sample some of Tuscany’s more acquired tastes, such as cinghiale (wild boar) or Chianina (a type of beef unique to the region).

With stomachs pleasantly full students made via considerably winding roads for San Gimignano, whose looming towers and uneven piazzas pay perfect homage to a past usually seen only in Hollywood movies. A guided tour yielded several of the city’s countless secrets—old blood feuds or hospices visited by weary pilgrims centuries ago. And of

course, one couldn’t leave San Gimignano without paying an indulgent visit to its world-famous gelateria. (If you ever go, try the pistachio!)

quiet villa surrounded by rolling hills and sprawling vineyards laden with dark purple grapes; a perfect end to a long, rain-free day… After a light breakfast the following morning, the trusty coach and its deft driver brilliantly navigated the snaking hills of Tuscany to bring his charges to the dark walls of Monteriggione, one of Sienna’s oldest outposts responsible for guarding the once important Cassia trade road.

Having toured the entire town, a feat easily accomplished in twenty minutes students ventured on to Sienna, as always an unforgettable experience. Green flags sporting proud geese (the mascot of this year’s Palio winner) waved triumphantly over exploring students, who had the afternoon to stop in tiny shops, restaurants, or the black and white-stoned wonder that is Sienna’s Duomo. Last views were taken from Sienna’s highest point, on a far reaching tower offering panoramas of the entire countryside.