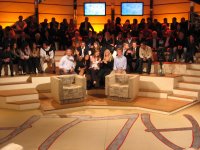 e as part of his course titled Contemporary Italy: Culture and Society.

The destination? Italy’s state television channel RAI3 for the live taping and broadcast of a weekly program, Ballarò, which covers issues of current interest on Italian politics, economics, culture, and society. Professor Schwarten and students were able to meet the show’s host, Giovanni Floris, as well as get a behind-the-scenes glimpse of a live television program.

Among other topics in his course, Professor Schwarten discusses Italian mass media, and students were encouraged to compare and contrast Ballarò with U.S. television programs treating similar topics with regard to content and structure, the role and conduct of the host and panel members, and the ways in which the viewer is involved or affected.