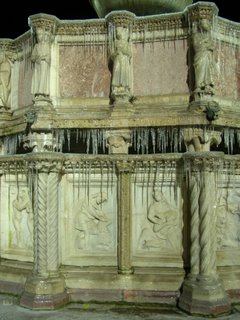 Usually during this time of year, students and locals pass by the fountain and likely see it iced over. With the recent mild weather however, the city seems more reminiscent of June rather than January. Favorite outdoor activities in town such as, la vasca—the famous Perugian pastime of strolling up and down Corso Vannucci—and people watching at “The Steps” until the wee-hours of the night have been in full-effect. Along with the rest of Europe, Perugia has definitely enjoyed these rather warm temperatures for winter. Until now.

Today the Perugian winter has officially begun. Late as it may be, the tramontana winds that whip right through the center of town have not lost any of their chilly bite. Yes, snowy skies are in the forecast and this is the January that we all know and love.

Spring 2007 students are about to discover a totally new side of Perugia that they’ve had yet to see since their arrival. They’ll put down their beloved gelato and in exchange they’ll warm up with a cozy mug of pudding-thick hot chocolate from Café Baglioni. They’ll experience the excitement in the air when the first street in Perugia, Via Bartolo, closes down due to icy road conditions. They’ll see snowballs whiz by them as local school kids celebrate a snow day. They’ll experience the still, silent city that Perugia becomes when its cobble-stone streets and red rooftops are blanketed under a fresh layer of fallen snow. L’inverno e’ finalmente arrivato.