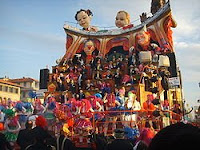 Traditionally, during Lent, parties and feasts were prohibited. The last days before the beginning of Lent were the opportunity to eat and drink and make merry, and this became known as Carnival. There are differing interpretations but the most likely etymology is carne vale, “goodbye to meat,” as the eating of meat was forbidden during Lent as well. Though Americans have Venice in their mind as the spot for Carnival, in reality the Italian city of Viareggio’s carnival is the most frequented by Italians themselves (and this year will be by Umbra students as well!). But for those studying that week of Martedì Grasso (Mardi Gras), there will be a number of Carnival celebrations in Umbria too