What I Learned in The Italian Classroom 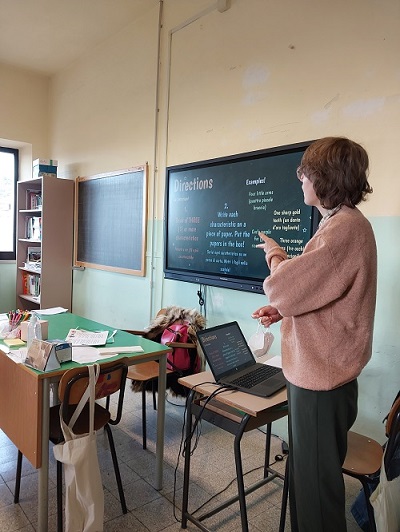 Of all the fears I’ve overcome while studying abroad, I never expected to overcome my fear of teenagers. I love to teach and have a lot of experience with young children, but the idea of entering a classroom of fifteen-year-olds filled me with dread. I was always afraid that they might judge or disrespect me, especially since I’m not much older than them myself. So, when I decided to volunteer as an English tutor at an Italian high school, I was deliberately stepping out of my comfort zone. Not only was I going to teach a 45-minute lesson to a group of teenagers, but I would have to navigate a language barrier in a school system that was completely unfamiliar to me.

Entering the classroom felt like being a celebrity. All twenty of the students were clustered in the front, enthusiastically shouting “good morning!” Throughout my presentation, there was never a moment when they were completely silent, but it wasn’t a disrespectful sort of chatter – it was as if they could not help but voice their thoughts out loud. It was clear they needed more action: I was given the freedom to teach them whatever I wanted, so why not create a lesson that allowed them to actively participate throughout?

During my next visit, I made my lesson a lot less lecture-centric. I allotted much of class time to answering students’ questions about American culture– they had so many! They were curious about school sports teams, the price of college, and the American education system. As soon as I discarded my presuppositions about what English tutoring should look like, I was able to provide the students with what they really needed – a discussion. Weaving through the hundreds of Italian students on their way out, I was smiling– I had gotten a class of teenagers to not only listen but to engage and have fun. Though I wasn’t “tutoring” in the traditional sense, the students were still being challenged to ask questions in English and think deeply about the cultural differences between our two countries.

Meanwhile, my Human Development in Culture class was preparing our Service Learning project: designing a creativity-based English lesson for middle school students. At first, the task seemed daunting; how were we to know what would engage a bunch of 10 to 13-year-olds, or even what amount of English they would understand? But after spending time in the high school, I felt more confident, volunteering to be the “instructor” in the classroom I was placed in. 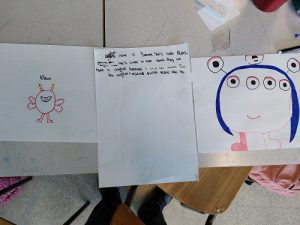 Despite my preparedness, though, when I saw I was with the oldest age – 13-year-olds – I again began to doubt myself. We had pictured younger middle-schoolers when designing our lesson. The task was to have them draw monsters using characteristics they had written in English, and then write a story about their monsters together. When I walked into the class, I was met by 20 teenage eyes, and silence – unlike in the high school, these students gave me their full attention, which was almost more nerve-wracking. They were shy at first, looking around at their classmates’ work before beginning to draw. I remembered being thirteen myself and wondered if a monster-drawing activity would be “uncool” to me. Standing in front of the classroom, I suddenly felt small– what if it didn’t work out? What if this wasn’t what the students needed?

But, to my surprise, the classroom soon transformed from awkward silence to a chattering, lively discussion. Students spent a long time designing and coloring their precious monsters, and even longer constructing detailed stories. After the first brave group shared, hands began shooting up; everyone was excited to show off their monsters. Just as I did in the high school,  my classmates and I had to tweak our planned lesson to meet the students’ needs; some steps took longer than others, and we completely changed the “sharing” portion at the end so that groups could show their monsters to the whole class. But my favorite part was seeing smiles on the 13-year-olds’ faces and realizing they had fun doing our silly monster activity.

When I said goodbye to my noisy, chattery group of Italian high schoolers during my last week of the program, I felt a mixture of sadness and accomplishment; I knew I’d miss them. At the end of the class, the teacher told me that one of the students– the “class clown” who always bombarded me with silly questions– had actually been too nervous to speak in English before I came. My experiences have given me not only a renewed confidence in my ability to command a group of older students but a heightened cultural awareness. Every group needs something different: some, like my high school class, need more engagement; others, like the 13-year-olds, just need an extra push to be creative. I also learned that a language barrier is nothing to fear, but that it’s important to consider how and what you are communicating to students.

As a Psychology major and an Education minor, the opportunities I’ve had here at Umbra have helped me grow by leaps and bounds. I stepped outside of my comfort zone this semester, and could not be more grateful for where it has taken me.

To learn more about Umbra’s Community Engagement activities, check out their website at: https://www.umbra.org/community-engagement-abroad/.