The Culture of the Apple of Eden: Symbology of Gender Roles 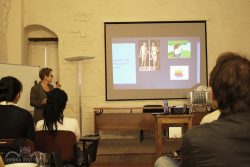 Sawyer presenting the imagery portrayed by cultural symbols throughout time

This week, Professor Deborah Sawyer presented her work on “From Eve to Madonna: Sex, Gender, and Religion”; a lecture that sought to explore how gender roles are constructed and reinforced through literature, art, and popular culture by the use or manipulation of familiar images.

Though the lecture touched on the difference between sex and gender, the main focus was on the Garden of Eden creation story and its influence on Western culture’s view of womanhood. Sawyer pointed out the dualistic view of womanhood often presented through the analysis of Eve and her famous encounter with the serpent and the apple: one often pictures Eve, the wicked temptress of man, but the alternative interpretation portrays the pure Eve who only sought to know the difference between good and evil, she desired wisdom.

Sawyer then went on to present the concept of men and women living on a spectrum, and not polarities; sharing that both genders are meant to work together, and one is not meant to have power over the other. Then, after presenting the imagery often portrayed by Madonna, and other cultural symbols throughout time, Sawyer shared that the role of the contemporary woman is, in fact, in line with the original Eve. Despite the interpretation that time has imposed on women and their societal role, Eve took her identity not from being the “other” in relation to Adam, but rather, from being herself. In the same way, the modern woman seeks an independent interpretation of herself according to her personal goals and abilities, not those of a man or according to the preference of a man.