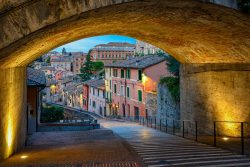 Perugia has won.
And it didn’t even know it was in a contest.

When I arrived in 2014 for my first year of teaching at the Umbra Institute I had no idea what to expect. I’d never been to this city; in fact, I’m not sure I’d ever been to Umbria. Not
intentionally, anyway.

My first visit to Italy was to Rome in 2000 and I fell in love. With all of Italy as a concept, of course, but with Rome itself. I spent six weeks in the city wandering its streets, discovering its secrets, learning all the dos and don’t and ins and outs, and filling my heart with its beauty, and its not-so-pretty aspects. The noise and the tourists (which for some reason I didn’t think I was) and the unending rush were all part of the reason I loved it, and I couldn’t imagine another city capturing my heart in the same way. Every time I came back to the country after that, I spent as much time as possible in Rome while I explored south to Naples and north to Venice—bypassing Umbria on the way via train.

Then I discovered what I’d been missing.

I arrived in Perugia on the same day—in fact, on the same bus—as my students that first year, having spent two weeks in Rome beforehand. The staff had met them at Rome’s airport as I’ve since learned they do every year, having traveled down the day before to be up long before dawn to meet the early arrivals. My students, jet-lagged and frankly terrified were gathered up with the other arrivals and we were all settled in for the ride north.

Most of them slept. I watched the countryside go by. As we rolled into Perugia I took a deep breath, excited to see a new city and the school, and the lovely little apartment they’d found for me, where I’d be spending my next five weeks.

And that right there is the key. The fact that I got on a bus and showed up in this lovely town without a worry. That I knew my students would be taken care of and that I’d have a place to live with windows that overlooked something amazing. And sure enough, it all worked like clockwork.

Umbra itself is located in a centuries-old building right in the main piazza with its gorgeous fountain. Classrooms are equipped with all the amenities we’d expect from the 21st century while maintaining their medieval character in the ceiling arches and the traces of doors and windows beneath the plaster on the walls. The library where computers for students reside is filled with heavy wood bookshelves and filled with research material anyone with a love for Italy would want to get their hands on—and students can (and do) spend hours in there working on their projects.

As an instructor at Umbra my job is to get students here, offer them an exciting and educational experience two days a week, introduce them to as much Italian history and food as possible, and then help provide them with guidance as they need it to negotiate their way through the city and the country on their own on the days we’re not together. Generally, they need me for about three days… after that, due almost entirely to Umbra staff and their ongoing and tireless support, students get it all figured out and they’re off into Italy to fall in love with it just as I did so many years ago.

And Perugia is easy to fall in love with. Its main piazza is alive with people at all hours, its food is exquisite and quite unique—Umbria has dishes that are found nowhere else in Italy, and while it does have its tourist restaurants, it also has fabulous gems hidden in nooks and crannies at every turn—and its museums and churches scattered throughout are as stunning as anywhere else in Italy. Twisty medieval streets, ancient Etruscan arches and walls, and one of the largest collections of in situ paintings in a nearby church are just a few of the reasons I keep coming back.

Which brings me back to the beginning. I don’t know when it happened, exactly, that my heart shifted from Rome to Perugia, or when I began looking forward to being in Italy without thinking immediately of how much time I’d spend in the Eternal City. This year will be my sixth one teaching with Umbra. And I’ve been in Italy since March 6 this year.

And I haven’t visited Rome once, because Perugia won’t let me go.