Inspired by the Presence of the Past 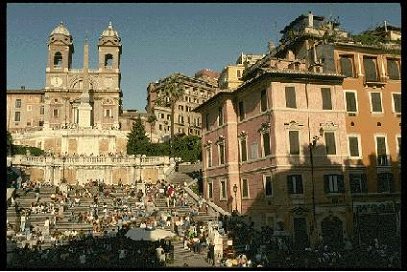 Professor Cynthia Clough and 26 students traveled to Rome to learn about several writers and their influence on Italy. These students, all members of the Creative Writing: Italy of the Imagination course had been preparing for the visit by reading selections by the famous Romantic poets, John Keats and Percy Shelley.

The Keats-Shelley House, situated at the base of Rome’s Piazza di Spagna, was the home where Keats spent his final three months alive, but is now a memorial dedicated to both Keats and Shelley. Inside the building are paintings, manuscripts, and objects celebrating their lives and the lives of other British Romantic poets.

After a tour of the house, students spent time at Café Greco, Rome’s oldest café. In its earlier times it was an artistic hangout for the likes of Lord Byron, Goethe, Richard Wagner, and Franz Liszt. The café exists to this day with period furnishings and a wait staff prepared to take one back in time. Throughout the trip, students used their surroundings as inspiration for their essays describing the presence of the past.

This excursion for Creative Writing was one of many co-curricular activities offered in conjunction with courses taught at the Umbra Institute. This weekend, students studying Renaissance Art will take a weekend trip to Florence.