On Wednesday, March 1, the Umbra Institute and the University of Perugia signed an agreement of mutual cooperation for the exchange of students, faculty, and courses that will have far reaching and long term implications for both institutions.

For students studying at Umbra, it will afford them an opportunity in the near future to study at the University of Perugia. For students at the University of Perugia, courses offered at the Umbra Institute will be available for them. This accord furthers Umbra’s relationship with Italian institutions in Perugia. Last month, Umbra signed an agreement of cooperation with the Commune di Perugia and maintains direct ties with the Universita per Stranieri in Perugia.

The ceremony took place at the historic university building and seat of the administration located at the Piazza dell’Universita (formerly the Monastery of the Olivetani). Umbra’s program director, Dr. Charles Jarvis, and Perugia’s Rector Professor Francesco Bistoni, exchanged words, signatures, and a handshake to mark the occasion (in photo, top). “This is a landmark event,” said Jarvis, “and it opens up a multitude of educational and cultural opportunities for both institutions in furthering the exchange of courses, faculty, and students. We are proud to be associated with such a distinguished and outstanding university as the University of Perugia.” Jarvis, along with Italian language director Francesco Gardenghi (in background, photo at left) had been working with the University for months to form this agreement. 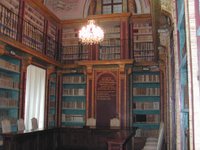 The University of Perugia is in its 698th year of existence, making it the third-oldest university. Attending the ceremony were members of staff and faculty of both institutions as well as special guests from Arcadia University, Cornell University, and the University of Denver.