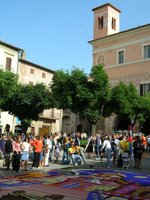 A colorful awakening Sunday morning awaited Umbra students, as they stumbled out of bed and down to Perugia’s central station, to hop the first (and earliest) train south, towards the little town of Spello. Spello’s “Infiorate”– literally, “the flowering” – attracts more attention every year, as locals gather in tradition to carpet the town in fantastic designs made entirely (ENTIRELY) from flower petals. But neither the splendid sunrise nor the prospect of seeing the big event was enough to rouse their sleepy faces, especially after the previous night’s World Cup showdown between Italy and our U.S. boys. Only after a few cappuccini did everyone become livelier and ease into a nice ride into the valley… 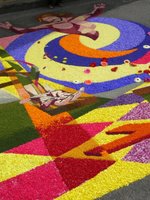 We saw that arriving early still wasn’t enough to beat the crowds as we inched along the peach-colored alleyways, catching the odd glimpse of colourful tapestries at peoples’ feet. Though the first designs were hard to see between kids and old men all vying for a look, we were immediately hit and intoxicated by the perfume of roses, carnations, wild thyme, and sunflowers. Finally, we managed to edge our way into the crowd. Brilliant tapestries unrolled beneath us, some depicting religious scenes, others more funky and abstract. We lingered and ogled with mouths open – our eyes dazzled and nostrils tickled. 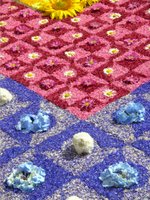 “Infiorate” is celebrated every year on the ninth Sunday after Easter for the Corpus Domini, a moving religious feast observed in a few towns in Umbria. Rumor has it that it begun in 1930 when one woman laid flower petals down on the cobble stone in a religious design that delighted the town’s people. Pleased with their reaction, she repeated – and elaborated – her flower petal tapestry the following year. L’Infiorata quickly became tradition and has gained so much fame that sponsors now support the event, offering prizes to the most impressive arrangements.

Though it was tough to choose, everyone had favorites by the end of the morning. The sun peaked around noon, and so did the hordes of tourists; so as the crowd thickened, we made our way down the station and headed back to Perugia. More awake now, and delighted with everything we had seen, we made it back just in time for lunch…and a nap!